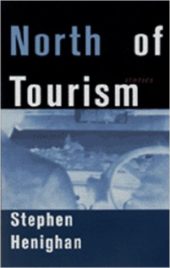 Dunvegan, Ont.: Cormorant Books, 1999.
These moving stories dramatize the dilemmas of people who have stayed away from home too long, probing the question of how to act and interact in a world of incessantly shifting cultural boundaries.  North of Tourism is about travellers who have broken free of boundaries, crossing the line from tourism to committed participation in societies in which they remain outsiders: an adventurous elderly Frenchwoman in Brazil, a dangerously solitary young human-rights worker in Guatemala, expatriates in Spain, uprooted Canadians in England, Westerners adrift in the former Soviet Union and, in the closing novella, a diplomat from Luxembourg struggling to salvage meaning from his scandal-shattered life as the First World War engulfs Montenegro and Serbia—all ride the tides of a world where all nations appear alluringly open, yet each continues to enforce the codes of its own history.
Most fiction writers adopt a wary, outsider stance towards their creations; Canadian author Stephen Henighan makes that stance explicit in these stories, where his protagonists are trying to understand “here” with the sensibility and cultural baggage of “there.”  An elderly Frenchwoman puts herself in possible peril searching for excitement in the slums of Brazil; a West Indian human rights worker leads a dangerous and isolated life in Guatemala; a young Canadian, struggling with his sexual identity, meets up with a raggle-taggle trio of tourists in Spain; a Toronto girl is forced to move to the rural Ottawa Valley and becomes trapped by its narrow vistas. The final story, “The Alliance of Tiny Kingdoms,” is the best of the collection: a diplomat from Luxembourg finds himself posted to Serbian Montenegro on the eve of the First World War. In a tone reminiscent of Barry Unsworth’s Pascali’s Island, Henighan explores the modern conundrum of open borders versus tribal loyalties, tolerance versus nationalism, universal humanism versus ethnic identity. And although he never draws attention to it, his Canadianness gives a special irony to a line like this from one of his Montenegrin characters: “There are twelve Serbs for every Monenegrin. It is easy to fight the foreigner, but what nation can resist the bear-hug of a twelve-times-larger brother on its borders?”
Bronwyn Drainie, Indigo.ca
This is beautiful, fresh writing, which insightfully explores its territory: the disparate struggles of being an outsider in our so-called global village
The Globe and Mail
Henighan captures the unhappy state of people torn from their homelands – wandering phantoms in time and place, who are forever out of sync….But the stories have charm and are quite wonderfully written. Reading them, I caught myself marking passages….I wanted to be able to revisit certain parts, passages that made me smile from the sheer joy of reading a well-turned phrase.
The National Post
He demonstrates an agile control over his subject matter, moving comfortably all over the globe, inhabiting his diverse characters with convincing psychological detail. The eight elegantly titled pieces in North of Tourism offer just the right blend of thematic unity and stylistic variety. Most importantly, Henighan has achieved a subtle, complex tone that allows readers to reach answers on their own, and even frame their own questions.
The Canadian Forum
Stephen Henighan’s fascinating, scrupulous and wide-ranging second collection of fiction….Henighan knows his craft and has a very fine sense of order and pacing – mathematical precision’s at work; the writing is refined and tidy.  Through exposition he draws readers towards a lucid moment, deftly sketches its complexities, and as easily pulls back into the narration. His people are footloose, not getting what they want, or what they think they want; they hide from themselves essential matter about themselves.
Michael Kenyon, The Malahat Review