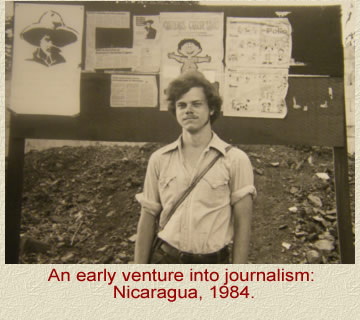 Stephen Henighan’s feature review of Philip Agee’s Inside the Company: CIA Diary was published in the Ottawa Citizen newspaper in 1975, when he was fourteen years old.  It was his third published article, and the beginning of an association with the Citizen that continued throughout his high school years.  Subsequently, Stephen has been reviewer, Small Presses columnist and an occasional foreign correspondent for the Montreal Gazette newspaper, has reviewed intermittently for The Globe and Mail, and has contributed articles to various other newspapers and magazines.

Since 1994, Stephen has been a reviewer for The Times Literary Supplement.  Here you can find Stephen’s TLS essays on the career of the American writer James Agee and the development of fiction in the African nation of Angola, and the 19th-century Brazilian writer Machado de Assis.

The column on contemporary culture that Stephen writes for Geist often attracts comment in Canadian newspapers and on-line communities.

In The Walrus, Stephen has written about poetry and politics in Central America, the literary culture of Mozambique  and the career of John Ralston Saul.

Stephen’s articles for the Literary Review of Canada  can be found here.

Stephen’s review-essay on the literary culture of mid-20th-century Buenos  Aires, which appeared in The Quarterly Conversation is available here.

His essay on becoming a father in his fifties, published in The Globe and Mail, can be read here.